The FBI shut down the file sharing website MegaUpload last week, and arrested 4 people, including founder/COO, Kim Dotcom.  With the exception of the ineffectual cyber attacks by “Anonymous” on Universal, the MPAA and the DOJ, there seems to been very little anxiety expressed by the shut down of MegaUpload. The digital locker service was charged with a criminal conspiracy of illegally distributing copyrighted material.

Why haven’t the newly empowered netizen activists cried out at this abuse of government?  After all isn’t this the type of “abuse” they were so worried about with SOPA just a day before?  After complaints from copyright holders, the US government decided not only shut down a website, but have jack-booted feds arrest non-us citizens in a foreign country.  This seems like exactly the chilling scenario everyone was screaming that SOPA would cause, and that would censor the internet, and ruin the webtopia that is the world wide webs.

But for some reason, my Facebook is not flooded with status updates saying “Stop the Government Takeover of the Internet.” I haven’t seen one tweet saying “Free Kim Dotcom. Free the Internet.” Nor a plea from Jimmy Wales on MegaUpload’s behalf.

Especially after their victory lap, I’d have thought these newly empowered freedom fighters would flex their social media muscles.  But they didn’t.

SOPA and PIPA had been debated for the last year.  It was being revised and hashed out in committees, but the only people who seemed to say much about it were the usual small group of internet journalists, and even most of them really didn’t take a side until last week.  But last week Google and Wikipedia decided to take a stand. Their “blackout” and fear mongering got over 8 million people to email their congressman saying NO to SOPA.

Impressive, but a little scary if you consider the motives.  For better or worse, Google and Wikipedia traffic in a lot of illegally copyrighted material.  They know it, and if they had to put even more resources to reduce the amount of copyright infringement, it would cost money.  Why should Google spend more money to curb piracy when they can say “it’s not our responsibility.”  Of course, that doesn’t have the same ring as “End Piracy, Not Liberty.” 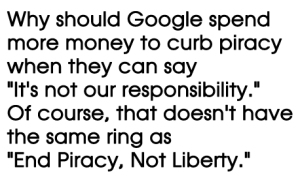 What if FOX and CNN decided to not broadcast their regular programs for an entire day, but instead showed stated that “The Government” was trying to take over the airwaves, and urged you to write your congressman. Then other networks joined in solidarity. I’m sure congress would get at least 8 million calls, but FOX and the other networks would also be called on their lack of objectivity, and most people would see the nets craven self-interests.

But the “enlightened” Google get a free pass.

It’s too bad, because it would be great it we did have a “super-power” who used their might to fight for social justice.  But Google isn’t interested in social justice, just the bottom line.