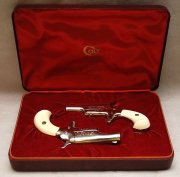 After the horrible events in Newtown, CT, something occurred to me that caused a sick feeling in the pit of my stomach, and that feeling emanated  from a small box on the high shelf in my closet.

I am not much of a liberal prosthelytizer, but my heart bleeds, more often then I’d like. Children, the environment,  equal rights, seniors, dead pigeons, you name it, I bleed for it.  In an odd paradox, I am also a gun owner. I have 2 single shot nickel plated dueling pistols.  They were a wedding gift for my parents 50 years ago, then they were a wedding gift to me.  My parents were not gun “enthusiasts,” but they both grew up in the midwest, and had some familiarity with hunting, so owning a guns seemed very normal to them. The wedding gift was meant as a joke- dueling pistols for the newlyweds. Ha.  When I was a kid on vacation in Virginia we’d shoot cans with the pistols, or more aptly, we shoot at cans. These guns were remarkable hard to shoot straight.  But I admit, they were fun.

The pistols went with the other unused wedding gifts (a bread maker, a crystal caviar dish) sat in my closet for years. I never gave them a second thought, until the tragic events at Newtown. Hearing about Sandy Hook Elementary made my heart bleed again, but then it nearly stopped.  In the home of my 5 year old son, and my 2 year old daughter were 2 lethal pistols.  No they weren’t loaded, there was no ammunition in the house. Nonetheless it terrified me.  I did not want guns in my house.

I thought about just throwing them out or selling them.  But I did not want someone else to use them to harm others or themselves. I thought about tossing them in the Gowanus canal (the only body of water in the world that is 90 percent guns.)  But I’m not a criminal, I shouldn’t have to “dispose” of the evidence.  Someone suggested taking them to the police.  Maybe that was the best idea, but it seems like an invitation for an interrogation. I looked for gun buy backs (which aren’t nearly as common as one would think) but even the thought of carrying the guns in public was unsettling. I ended up taking them apart, taking out the hammer assembly entirely, rendering them no more lethal than the crystal caviar dish.