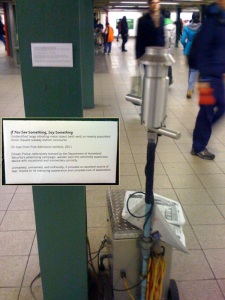 Apparently someone thought  the industrial looking unmarked air sensor in the Union Square subway station looked like an art installation on loan from a museum.  All that was missing was the museum plaque with a title and esoteric description:

If You See Something, Say Something

On loan from Free Admission exhibits, 2011

Citizens Police extensively trained by the Department of Homeland Security’s advertising campaign, wander past this extremely suspicious device with occasional and momentary curiosity.

Unmarked, unmanned, and unfriendly, it provides an excellent source of fear, thanks to its menacing appearance and complete lack of explanation.

Air sensor before it became art.